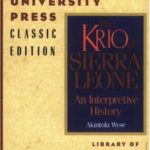 Recommended Reading
The Krio of Sierra Leone—often erroneously called ‘Creole’—are a people with a unique tradition and history. Their ancestors, the first colonists of the Peninsula on which Freetown stands, were black people brought to Africa from London, Nova Scotia and Jamaica, and ‘Liberated Africans’ freed from slave ships intercepted on their way to the Americas. Never a large group, the Krio people were at first favored subjects of the colonial rulers, and received the full force of the evangelistic and educational outreach of the English-based missionary societies. Soon they had produced an elite echelon of professionals, academics, clergymen and business entrepreneurs very much in the white man’s image. The middle and late nineteenth century was their heyday.
Wyse has set out to interpret the history of the Krio from their earliest days as a collective entity to the present, to chart the graph of their rise and decline as a political force, and to examine the characteristic ethos of the people as expressed in their social, economic and above all educational aspirations, and in the careers of leading political and intellectual figures. The important role of the humbler Krio traders and market women in financing the education of their offspring in each generation is stressed, and the author meets the often-voiced criticism of the Krio head-on by frankly examining the weaknesses of his people, along with their strengths.
Amazon
``The Krio of Sierra Leone: An Interpretive History`` - Akintola Wyse

``The Black Poor and the Founding of Granville Town``

The first group of colonists to establish a colony in Sierra Leone were the Black Poor (also known as the “Old Settlers”) of Granville Town. Eventually 411 African Americans, West Indians, and Black Britons left the dock at Plymouth on April 9th 1787. Only 377 of the blacks went ashore when they arrived at Frenchman’s Bay (renamed St. George’s Bay and now called Kruman’s Bay). Led by their British superintendent, Captain Thompson, they negotiated a treaty with the Temne sub-chief King Tom and began to clear the land. Their Settlement was called Granville Town, after their benefactor Granville Sharp. Granville Sharp called their colony the Province of Freedom. This colony was to last from May 9th 1787 to December 1789. Many of the colonists died from disease during the rainy season (which was heavy during the first month of their arrival in Sierra Leone).

``The Nova Scotian Settlers and the Founding of Freetown``

The second attempt to establish a Colony in Sierra Leone was successful and lasted as a political entity until 1961; it lasts today as the present day and (appropriately named) ‘Western Area’ of Sierra Leone. This second attempt to establish a Colony in Sierra Leone began in March 1792. Black Americans who came to Sierra Leone via Nova Scotia founded this second colony and settlement. Though rooted in the same community of blacks as some of the Black Poor of London, these colonists were more resilient than their predecessors. Many of the colonists were skilled artisans or had other trades, and some were pioneers in the community. The arrival of the Nova Scotians and the idea of founding another colony in Sierra Leone began with an attempt to revive the first colony in Sierra Leone. Eventually on January 15th 1792, a fleet of fifteen ships left for the shores of Africa. It was the largest fleet of blacks ever to immigrate to West Africa. Between February 26th and March 9th, the Nova Scotians arrived on the shores of Sierra Leone. By March 11th, the Nova Scotians were able to gather around a cotton tree (which is according to legend the famous cotton tree near St. George Cathedral) and sing to the Lord for their arrival in Africa. They imported a North American pioneer tradition, which came from their American heritage. The historical “bod oses” of the Krio people most likely originated from the Nova Scotians who built two storied wooden houses with stone foundations, and shingled roofs as early as 1796. By the 1820s they were black bourgeoisie; most upper class blacks looked to them or Europeans in the colony for fashionable style in clothing and housing. Proud of their transatlantic roots, the Nova Scotians called themselves the “Settlers”; and from their arrival in Africa to the late 19th century, the term “Settler” was used in reference only to the Nova Scotians and their descendants.

The next influential group of colonists were the Jamaican Maroons. In Sierra Leone they are probably famous for the church they established between 1820-1822 called St. John’s Maroon Church. The Maroons have a rich history which extends back to their time in Jamaica. The Jamaican Maroons were ferocious warriors from the cockpits of the Jamaican mountainside. When the English took over Jamaica, the original Spanish settlers released their slaves into the mountains. These slaves adapted to life in mountains. Many of those original Maroons intermarried with the native Jamaican populations of Arawak and Taino Indian. Another Maroon community was formed when slaves escaped from their British masters; for the most part these slaves were of Akan speaking (Ashanti and Fanti) origin. The Sierra Leone Company (who at that time was having trouble with the Settlers in Sierra Leone) was eager to welcome new colonists. It was thought that the Maroons would establish a settlement at the Banana Islands; but the Caulker-Cleveland wars and the dispute over who truly owned the islands made the move unstable. After the second Maroon War, the Trelawny Maroons were originally sent to Nova Scotia and 550 of them were then repatriated to Freetown in 1800

Between 1808-1860s, the last and largest group of ancestors of the Krio people arrived in Sierra Leone. This group was known as the Liberated Africans, and they had been rescued from slavery before they reached the shores of the Americas. Most of these recaptured slaves (who were also commonly called ‘Recaptives’ having been ‘captured’ twice) were from the modern day region of Nigeria and were mainly of Yoruba and Igbo stock. However many Recaptives came from the Congo, Dahomey, Cameroon, and Senegal. The Liberated Africans came from as far away as Mozambique and as close as the interior of Sierra Leone. The Recaptives contributed greatly to the African heritage of the Krio people. Having little interactions with Western culture prior to enslavement, the Liberated Africans arrived in Sierra Leone with their individual tribal identities. However some of these tribes coalesced or adopted group names unique to Sierra Leone. Recaptives from Dahomey were known as the Popo, Yoruba Recaptives were known in Sierra Leone as the Aku because of their greeting. The Aku added many Yoruba words into Krio such as “Kushe” into the Krio language. The Hunting and Egungun were also cultural additions of the Aku recaptives. The Liberated Africans founded the villages or suburbs of the Freetown Peninsula; in 1809 they founded the village of Leicester (with government supervision), and further villages were established with Recaptive population. Many Liberated Africans were successful traders and business people. Recaptives such as Emmanuel Cline (for whom Cline Town is named) and William Lewis (who started hawking with half a dollar and was the father of Sir Samuel Lewis) are notable Liberated African merchants. Many Liberated Africans utilized their links with regions outside of Sierra Leone and were able to establish trading links between these countries and Freetown. As their wealth increased, the Recaptives were able to rise within colonial society as one of the leading groups within the Colony. Their economic success would contribute toward the development of Krio culture and society.

Are you a Krio Descendant?